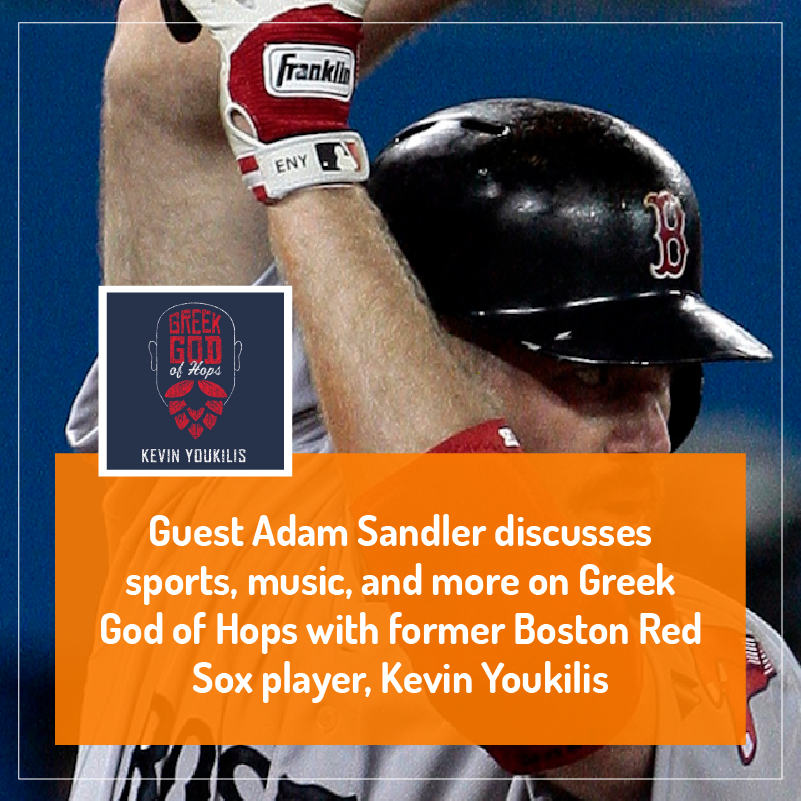 In this episode of Greek God of Hops, Kevin Youkilis and Adam Sandler discuss their pasts and how their passions came to be in their respective fields. Their paths intertwined when Youkilis first met Sandler on a movie set through a friend. Sandler admired Youkilis during his stint on the Boston Red Sox and would continue to root for him despite playing for the rival New York Yankees.

Throughout the podcast, Youkilis and Sandler talk about their experience as fans of baseball and sports in general. As a former MLB baseball player, Youkilis has dedicated much of his life to playing baseball and training to become the best player he could be. He spent nine years in the MLB (three time all-star) and to this day finds watching and learning about his sport exciting and fascinating. His transition from a player to a fan has given him a greater respect for the announcing of the game as well as insight on how players might react to certain situations. Even some of the most adamant fans like Sandler have less of a natural inclination for knowing the games’ ins and outs like Youkilis. Youkilis describes his sense of the game similarly to Tony Romo (former quarterback for the Dallas Cowboys), and has garnered a reputation for knowing what play the offense will call prior to the snap of the ball. It seems as if the talent transcends to many of the game’s students; Youkilis states that he can sometime guess how the batter will hit the ball before it has been hit which goes to show just how much practice it takes to become a professional athlete.

From a fanatical perspective, Sandler and Youkilis have similar interests in sports and music throughout the podcast. Sandler is an avid baseball fan but loves going to events regardless of the sport. Youkilis asks Sandler if his celebrity status has hindered his ability to go out and enjoy watching the games. Sandler replies, “I still get excited for every game and love it. Everytime I get to go it makes the day better.” The impact of sports in both Youkilis and Sandler’s lives withstood the challenges and difficulties of the public’s interest in their lives. Throughout the podcast, their appreciation for sports seems to connect them back to their younger days, summoning up both nostalgia and a shared feeling of home.

The podcast continues, diving into Sandler’s interest in music. His father was a talented acoustic guitarist which led Sandler to learn how to play at a young age. At 12 years old, Sandler took guitar lessons and became a talented musician in his own right. Sandler reveals a not-so-widely-known fact about himself: he wrote an Album called “What’s Your Name” in 1997. His album explores his upbeat style of play and reggae influences.

Adam Sandler’s guest appearance on Greek God of Hops sheds light on the nature of sports as being a unifying factor between people—especially for Sandler and Youkilis. As a fellow Jewish icon in his respective industry, Sandler had plenty of respect for Youkilis regardless of what team he played for. Sandler told Youkilis that despite fellow Yankee fans chastising his unorthodox batting stance, he “loved it and thought it was cool and being Jewish made him love everything about him.”  Youkilis and Sandler’s chemistry flourishes throughout the course of the podcast. Sandler and Youkilis seamlessly speak regarding many of their interests (those that are predictable and those that are not),  both bringing enthusiasm and knowledge on the worlds of sports and music.