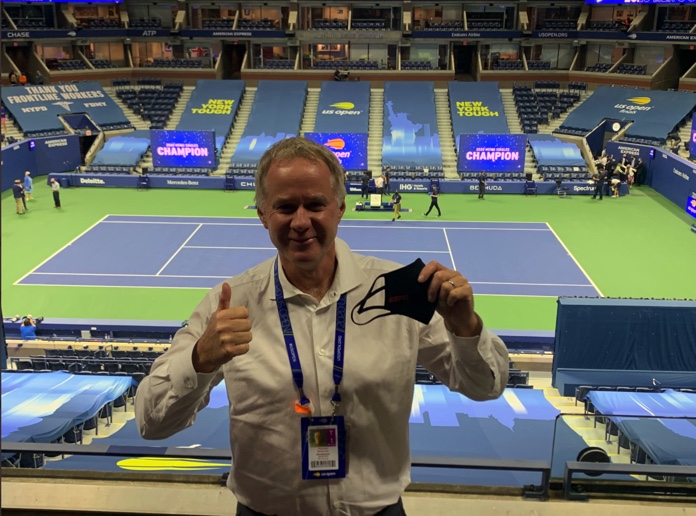 Across the sports world, drastic changes have been implemented to ensure the safety of the players, coaches, and commentators. The NBA popularized the use of a bubble to restrict athletes from coming into contact with anyone who may have contracted COVID-19. So far, the NBA’s bubble experience has been successful which led to the 2020 U.S. Open implementing similar protocols for their players. In MuddHouse Media’s host Patrick McEnroe’s Podcast: Holding Court, he speaks about some of the differences that players and others involved faced this year versus past tournaments. So what exactly were these differences?

In previous years, U.S. Open participants spent much of their time in Manhattan where there are countless activities to do in the big city. Now that players needed to stay in the bubble, they needed to find other sources of entertainment. Recognizing this, the organizers of the tournament set up a big screen in the courtyard where players could compete in a trivia night or watch other sports such as the NBA and NHL playoffs. They also provided a game room in the bubble where foosball was a main source of entertainment for the players.

The new bubble environment also caused some other changes in the matchplay during the tournament. The two biggest stories involved Novak Djokovic and Naomi Osaka. Osaka made headlines early on for her willingness to withdraw from the tournament due to social justice reasons. The organizers delayed the matches to allow Osaka to continue to compete. She ultimately would end up winning the Women’s Singles Tournament. Djokovic who is the World’s overall men’s number one player was disqualified from the tournament due to hitting a linesperson accidentally out of frustration. He has apologized and the situation resulted in an open field for the men’s championship.

Another major change for this year’s U.S. Open tournament was the limiting of fans due to Covid-19 restrictions. McEnroe speaks about how this can negatively affect players during their matches. Some players specifically feed off the energy that the crowd gives them to gain momentum in their matches. Without the fans, preparation and experience could provide players with the edge required to win the match. McEnroe talks about the Andrey Rublev vs Daniil Medvedev match which resulted in Medvedev winning the match in a 7-5 tie-breaker. The two Russian competitors had previous experience playing each other in which Medvedev got the edge which McEnroe attributes to his win in this U.S. Open. Medvedev seemed to have the confidence at the end of the match to overcome the upset bid by Rublev. U.S. Women’s Tennis star Serena Williams may also have been affected by the changes to the format of the tournament. Fueled by her large fanbase, Williams usually has crowd support to give her the confidence and energy to dispel her opponents. However, in this year’s tournament, the lack of fans may have made her opponent Victoria Azarenka more comfortable and ultimately defeat Serena in the semi-final.

Overall, despite the fact the fans and participants had to perform and be contained in the Bubble, the overwhelming opinion was that the tournament still brought fans the usual excitement and that the USTA did a wonderful job not only ensuring the safety of the participants but facilitating excellent matchplay. And Muddhouse Media’s host of the Holding Court Podcast series Patrick McEnroe was right there in the Bubble providing expert commentary for ESPN throughout.  Check out his podcasts on the U.S. Open to hear more!